Dilworth Paxson attorney James Eisenhower has been elected President Judge of the Pennsylvania Court of Judicial Discipline by the Judges of the Court.  He was appointed to the Court by Governor Tom Wolf.  The eight member Pennsylvania Court of Judicial Discipline hears and decides cases of judicial ethics and misconduct and has jurisdiction over all judges in the Commonwealth.

“I am honored to be chosen for this position of responsibility by my colleagues,” said James Eisenhower.

Judge Eisenhower is an attorney and former federal prosecutor with more than thirty years of experience in government and private practice who centers his legal practice on white collar criminal defense, internal investigations, and compliance advice. He was a White House Fellow in the administration of President Bill Clinton where he served on the National Security Council staff. Judge Eisenhower drafted Presidential Decision Directive 42 on international organized crime, and the Executive Order that seized the assets of the Cali cartel, then the world’s largest cocaine distribution network. He was a primary administration liaison to the International War Crimes Tribunal, The Hague, Netherlands for Bosnia and Rwanda.

Judge Eisenhower began his legal career as an Honor’s Program recruit at the United States Department of Justice, where he served as a federal prosecutor in the Civil Rights Division, Criminal Section, enforcing our nation’s laws against police brutality and hate crimes. He also served as an Assistant United States Attorney, Eastern District of Pennsylvania, where he prosecuted cases of police and political corruption, narcotics and weapons offenses, and insurance fraud. He was awarded the Attorney General’s commendation for “Sustained Superior Performance of Duty.” 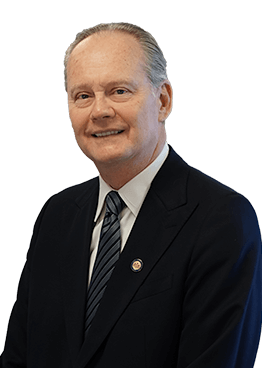